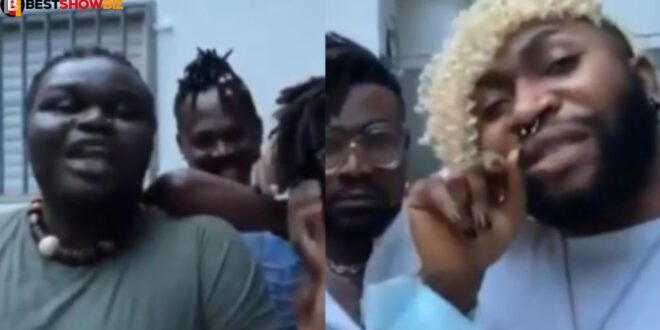 A bunch of gays in Germany recorded themselves making fun of Ghanaians for their contempt towards them.

In a video, they can be heard boasting that they’re chilling and trending while Ghanaians suffer.

Since Ghanaians have rejected and discriminated against them, they have made Germany their home and are living life to the utmost.

This follows the recent release of a video of a Ghanaian guy marrying his gay partner in Germany.

A video of a Ghanaian man being married by a white man was recently shared on social media; the Ghanaian man, who was clearly on the bottom, was dressed in a black coat with his veil spreading on the floor.

Ghanaians, who are adamantly opposed to homosexuality, reacted angrily to the video.

Meanwhile, parliament has provided the administration with a law that seeks to criminalize the LGBT community’s actions in the country.

Anyone who supports or participates in the conduct, according to the bill, faces a sentence of 5-10 years in prison if caught.

Read Also  Stacy Amoateng shares private bedroom video to prove that her marriage is not in crisis as people claim.
Share