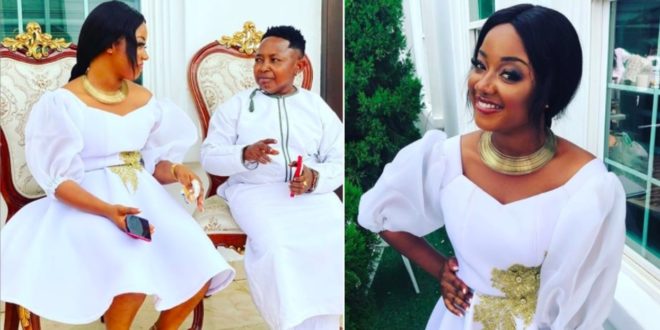 Kumawood actor Wayoosi has for the first time flaunted his girlfriend on social media after weeks of coming out to deny rumors that he is dead.

The actor – who once suffered a deadly illness of kidney malfunction – has a great taste for quality goods and this beautiful yet to be identified girlfeind of his tells it all.

This young lady was first spotted with the actor during the naming ceremony of Rev. Obofour’s triplets which came off at his East Legon mansion. The duo was seen walking and all cozy around each other but none was known about their relationship.

ALSO, READ Video – Emelia Brobbey reveals why she stopped being an Agric teacher to become an actress

well, all doubts have been cleared by Wayoosi who has taken to his social media handle in indicating that he shares a romantic relationship with the said young lady.

Sharing the photos on his Instagram handle, Wayoosi used the opportunity to preach to peace ahead of the upcoming elections saying that he was not ready to loose his girlfriend over politics.

“Ghana ?? We Need Peace In Our Coming Election, How Would I Lost This Beautiful Lady And My Family All Because Of Politics. ??Stand For Peace????,“ he wrote.

see thier pictures below: