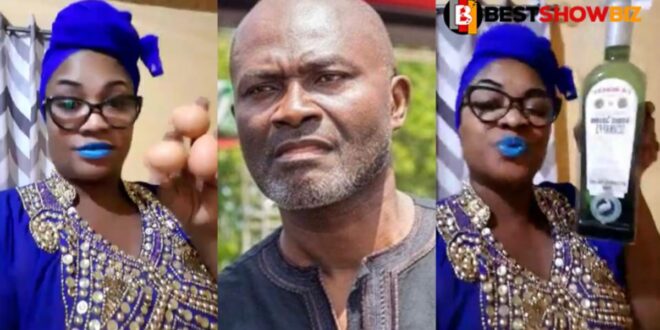 Araba Dawson-Williams, the mother of one of Kennedy Agyapong’s daughters, has reacted to comments made by the Assin Central MP regarding her daughter.

The Assin Central Member of Parliament recently described how one of his daughters has effectively become a beggar as a result of her poor decisions.

Ken Agyapong said that his daughter was begging for money to complete her studies after squandering several opportunities he had given her.

Ken Agyapong claims that his daughter left California Institute of Technology (CIT) in her third year of a five-year Architecture degree.

According to the Assin Central MP, who spoke on Oman FM, he pays $84,000 in school fees every year and is dissatisfied with his daughter’s selection.

The fact that he had just paid half ($42, 000) immediately before his daughter contacted him while he was on a plane to China to notify him that she was dropping out was the most difficult thing to him.

He also disclosed that her daughter had developed a drug addiction and was living a highly promiscuous lifestyle.

Kennedy Agyapong said that he cut her off after that and even spent the remaining half of her school tuition for the year on a Bentley.

While he did not specify the daughter’s name, it has now been revealed that she is Anell Agyapong, a 25-year-old daughter he had with Araba Dawson-Williams, a Fante lady.

The Assin Central MP has been challenged by Anell’s mother to enable Anell and his other children to take a test to confirm or refute his allegation.

Dawson-Williams confessed in her outburst that she and her daughter were wrong, but she knows worse things happen in Ken Agyapong’s family.

She revealed a lot about Ken Agyapong and his family, even threatening to curse him and his other children if he did not recant his remark.