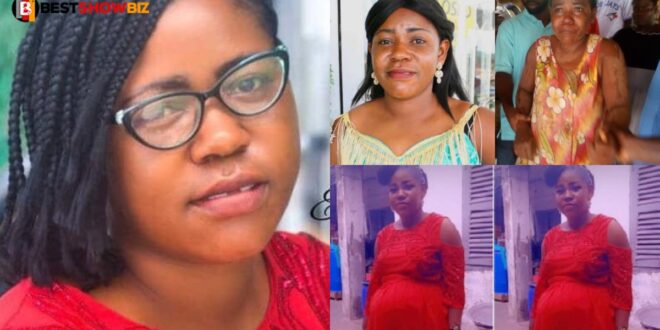 Josephine Panyin Mensah, the Takoradi-based woman who took Ghanaians on a merry ride in her well-scripted deception, has been found twerking hard for the camera in a throwback video.

As her neighbors and possibly her brother filmed the show, Josephine aggressively shook her waist and bortos to Kuame Eugene’s huge hit, Turn Up.

Her husband has remained by her side throughout, and in this latest development, the family can be seen on a video cursing the police, the Regional Security Council, and the Regional Minister for the way they handled the situation.

Medical professionals who evaluated the woman, according to the police, said she had never been pregnant.

Josephine’s husband had previously spoken to Connect FM, passionately opposing the minister’s viewpoint by claiming that his wife was pregnant and that records at the Takoradi Hospital show that she had been pregnant for nine months.

The statements of the regional Minister, who claimed that National Security should have done its due diligence before releasing that piece of information, drove him to tears.

Meanwhile, her mother Agnes Essel and her husband Simon Michael are at home. According to 3news.com, Josephine’s husband and mother-in-law are suspected of assisting her in faking her kidnapping.

The suspects were apprehended to aid the investigation since they had been identified as collaborators by the police. Justice Acquah, an adviser to Western Regional Minister Kwabena Okyere Darko-Mensah, is said to have confirmed their detention.

“Because it was a syndicate,” says the narrator. It had been well prepared. A kidnapping cannot be staged by a single individual. Acquah was cited as adding, “He had accomplices who assisted ensure that they carried out their ideas successfully.”