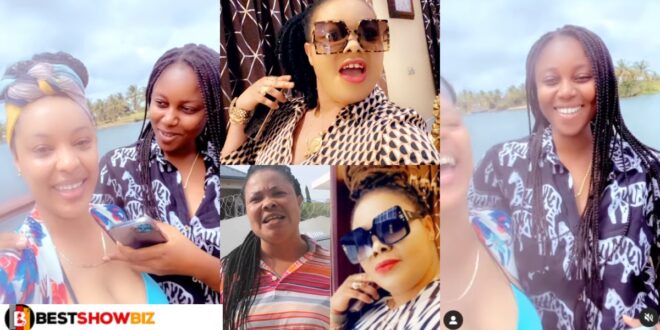 Actress Yvonne Nelson has suddenly launched a barrage of shots at Nana Agradaa on her birthday, seemingly out of nowhere!

In honor of her birthday today, Yvonne has done something that no one could have predicted: she’s found a way to start a feud with  Nana Agradaa.

It would be the most unusual thing that could possibly happen — and yet, that is exactly what we are dealing with right now.

The fact that Yvonne Nelson is mocking Nana Agradaa today may be due to her delighted state of mind following her birthday celebration.

It’s clear that celebrating her 32nd birthday has put Yvonne in a happy and carefree frame of mind.

Yvonne and Nikki videotaped themselves mimicking  Nana Agradaa at the same time.

In her infamous video, they used her phrases ‘Aboozigi’ and mispronounced the names of fancy designer brands in the same manner as she does.

When it comes to Dolce & Gabbana, Agradaa frequently pronounces the name in a way that sounds something like ‘Donzy and Gabanni.”

She also consistently mispronounces the names of other designer labels.

They went through some of them as they plainly trolled Agradaa.

As a world-class attention seeker herself, Nana Agradaa may choose to take this in good faith, or she may decide to turn it into a ‘beef’ in order to keep up with the latest fashions.

No one knows what she’ll say, but we do know that after she sees this video, she’ll definitely have something to say about it!

Take a look at them below…