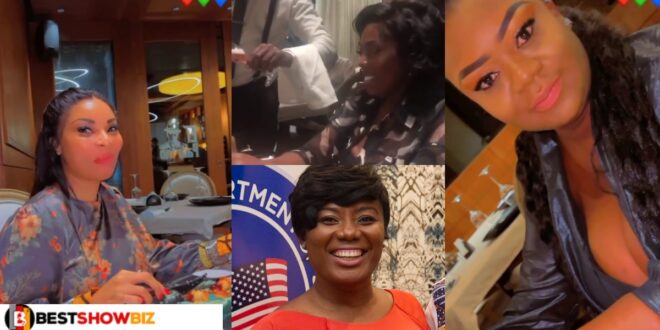 Nana Aba Anamoah, a top media personality, has spurned Bridget Otoo after she childishly sought her attention on Twitter.

Bridget Otoo requested that her programs be edited before they appeared on television. She also stated that she was leaving the reality TV show as a panelist.

This came after she discovered that Nana Aba Anamoah and Bola Ray had hired Ghanaian infamous blogger, Journalist Albert, to be an anti-cyberbullying advocate.

Bridget Otoo claims she was not notified of the decision to reconcile with the blogger until she discovered it on Twitter.

Read Also  "I am the queen of music"- Wendy shay Respond to Sista Afia's diss song.

Bridget Otoo stated that reformation and reconciliation require time, and hence she does not agree that Nana Aba and Bola Ray have rewarded a terrible deed.

Nana Aba Anamoah, on the other hand, has declined to comment or respond to Bridget Otoo.

Nana Aba Anamoah has taken time out of her busy schedule to relax with her girls and have fun.

She was seen in a video with a happy expression enjoying with her buddies.

We’re not sure why they’re celebrating, but they’re seen cheering and drinking wine after Bridget Otoo intended to cause problems!