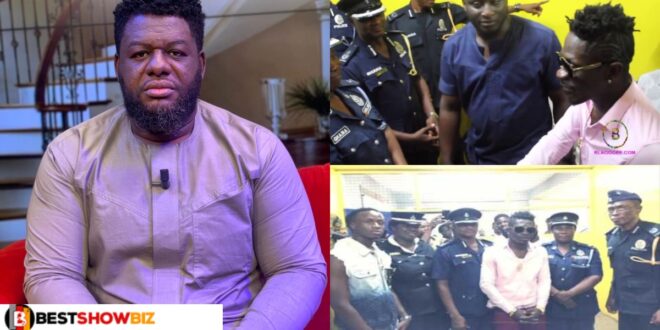 Shatta Wale’s photo in which he knelt in front of the IGP contains far more information than the general public is aware of.

Shatta Wale is the furthest thing from humble, so this insider story comes as no surprise.

Arnold Baidoo, an entertainment commentator, revealed what really happened at the IGP’s meeting with the celebrities.

Shatta Wale, being the obstinate one, enjoys playing the scapegoat, and the police had time for him that day.

If it hadn’t been for the intervention, the news would have spread that Shatta Wale had been imprisoned yet again.

Arnold explained that there was a misunderstanding between Shatta and some police officials, and COP Kofi Boakye was not pleased.

When he realized what was going on, he got up and asked why Shatta Wale was misbehaving in their presence.

In Bulldog’s previous retelling of the story, he used the word “USHER” to describe how Shatta Wale was ushered out of the meeting.

Arnold clarified the term and revealed that the Police had requested that he be LOCKED UP.

A-Plus jumped to Shatta’s defense, claiming that the Police did not use that word.

Bulldog chastised Arnold for being a liar and for being unable to speak the truth.

When Nana Ama McBrown asked Arnold to clarify whether those were the words of the Police, Arnold maintained his story.

A-Plus and Bulldog insisted that Arnold was lying about his statement until the show’s producer confirmed that the Police did indeed say Shatta should be locked up.

A-Plus shamefully recanted his position and agreed with Arnold and the producer.

Back to the incident: when he requested that Shatta Wale be locked up, he was leaving the building, and the Police told him that they should not let him out but rather lock him up.

A-Plus and others did an excellent job in rescuing him and pleading with the police to let him go.

Read Also  The Boyfriend Of Bobrisky Surfaces: Is He Gay? - Photos

Shatta later apologized for his actions and contributed to the meeting.

The image of him kneeling was explained further as him pleading with the police to let the celebrities live their lives freely, free of the many restrictions.

The purpose of the meeting was to inform them that they are not above the law and that any crime they commit will land them in trouble with the law just like any other ordinary citizen.

Their subsequent actions will show whether they took the meeting seriously or not.