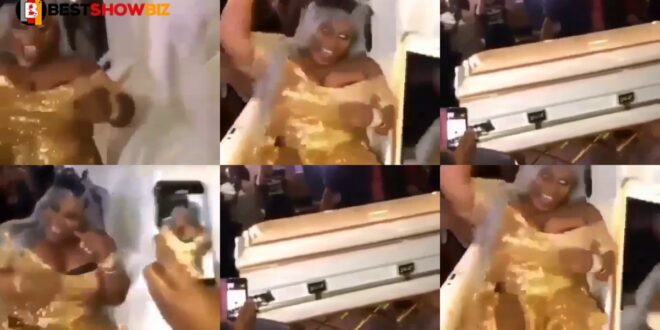 On social media, a woman has made many people’s mouths drop after she opted to make a big entrance on her wedding day while being carried in a coffin.

The daring bride was seen making a dramatic entrance into what appeared to be her wedding party in a new video seen by Bestshowbiz.com.

Some of her friends cheered as she was pushed into a white coffin that was wrapped in a black cloth.

A guy was spotted conducting some antics before moving to the casket when it was put in the middle of the room.

The man can be seen in the video peeling back the black fabric, revealing the shiny white coffin’s head.

The guy opened the coffin immediately after removing the cloth, and to the amazement of many, the bride who was laying in it sat up.

She was seen smiling as she inhaled some air, sparking additional cheers from the dynamic array of participants, who were busy recording the video.