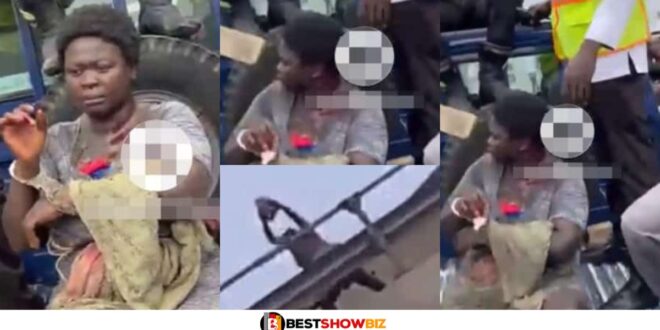 Watch the sad video of how the mἆd woman st()ned and k!lled the young man at Circle and how Police arrested her (videos)

Monday marked the day that police in Accra’s Kwame Nkrumah Circle apprehended a mentally ill woman for the murder of an unidentified young guy she had slain with a rock.

The incident occurred after the woman struck the man with the rock.

we were able to collect footage of the horrific incident, which shows a man laying in a pool of blood near the Nkrumah Interchange, often known as Dubai. The footage gives an account of the horrible scene.

Eyewitnesses and unsubstantiated accounts indicate that the man in question was seen walking with the crazy woman on the overpass.

As a result of this sighting, suspicions were raised regarding the nature of his relationship to the woman.

He is said to have informed bystanders that the woman was his mother and that he was attempting to get her off the street and back into her home.

The woman apparently started throwing stones at the man in the heat of the situation, and when he was hit, the man fell to the ground. She then grabbed a large rock, which she used to repeatedly strike his skull until he bled to death.

The woman was taken into custody not long after law enforcement officers responded to a request for help and arrived at the gruesome scene on the flyover.

Eyewitnesses have stated that they were unable to approach the situation in order to save the man because they feared for their safety due to the fact that the woman was equipped with stones.

Many people have goosebumps as a result of the occurrence, and other people have given various accounts of what happened.

Take a look at some of the testimonies of witnesses down below.