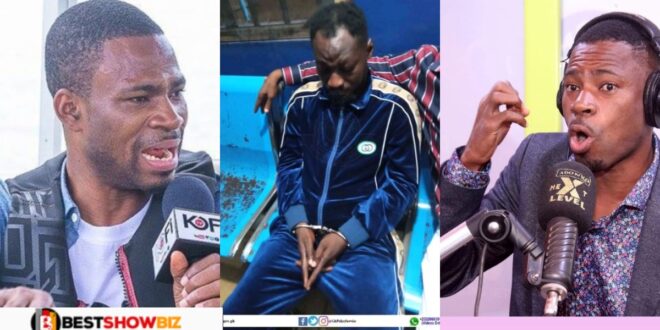 A video that has found its way onto the internet depicts the moments when comedian and actor funny face was detained by the police following his appearance on Kofi TV.

Funny has vowed to kill his old friend Kalybos and Bismark the joke, who he believes are responsible for his current state of mental health.

The police, who had overheard the actor’s comments, arrived at the location where Funny Face was conducting an interview with Angel Fm host Kofi Adoma and arrested him and drove him away in their car.

This followed an altercation that occurred on Tuesday, October 19, at the Kofi TV studios, which resulted in him being taken to the police station and then taken to court, where he was ordered to be taken to a psychiatric hospital.

Read Also  Video: Netizens shame Bobrisky for dressing like a man to visit his family house