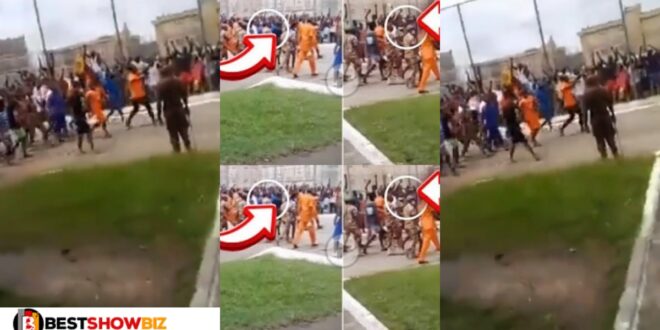 Popular dancehall musician Shatta Wale has not been able to keep his cool since being apprehended by Ghana Police after a phony gunshot attack.

Shatta Wale, as we reported earlier, was detained for distributing false information on Tuesday, October 19.

After pleading not guilty to the allegation of publishing false news that provoked fear and terror, the dancehall musician was sentenced to one-week confinement at the Ankaful Maximum Security Prison.

According to a new video circulating online, the troubled dancehall musician arrived at the Ankaful Maximum Security Prison to begin his detention sentence.

Shatta Wale was greeted enthusiastically by prisoners at the penitentiary facility, who cheered him on as he walked by them under full security.

Read Also  "Please keep it calm"- Kuami Eugene beg fans after a lady sent him a video of her huge backside.

The prisoners shouted his name and applauded him for joining them in the video obtained by Bestshowbiz.com.