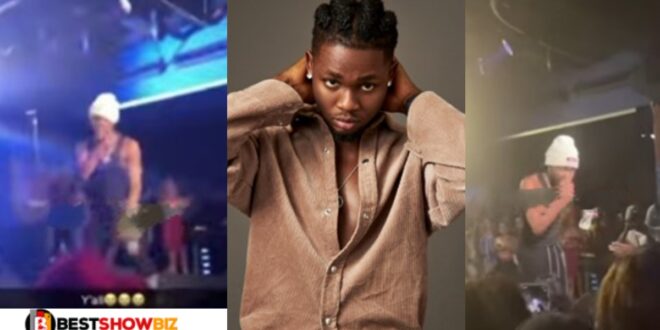 Watch the Moment Omah Lay sacked a lady for not singing, dancing at his concert (Video)

Omay Lay was irritated when one of his audience members in the United States refused to dance to his songs while he was performing.

Remember that the Nigerian singer who sang on Gyakie’s Forever remix song began his U.S. tour on September 27 and performed in various cities until his final tour on October 13.

Lay noticed one female looked indifferent during his most recent concert in Texas, as she was not singing along or dancing.

He told the DJ to stop playing, then pointed to the lady and said he didn’t want to see her there.

In the video, the ‘Infinity’ hitmaker asked if she didn’t like his song or if she didn’t come to see him. He further instructed her to leave the premises or move to the last row after she gave an inaudible explanation.