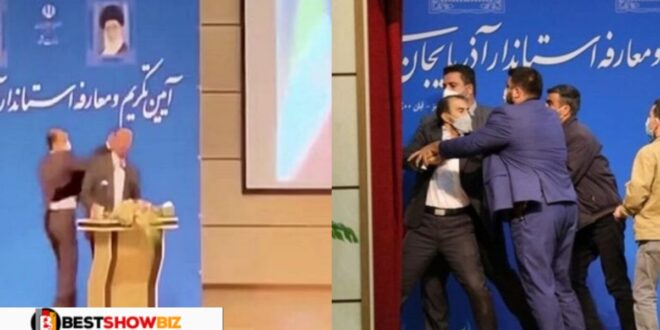 During a weekend event, a guy bypassed security and stepped up to a podium to slap a recently appointed Iranian governor on stage, causing a commotion on social media.

When the sad occurrence occurred, Zeinolabedin Khorram, the new governor of East Azerbaijan province, was on stage making a speech at the Imam Khomeini Mosque in the northeastern city of Tabriz.

As shown in the video, the individual, subsequently identified as Ayoub Alizadeh, stepped on stage while wearing a face mask and delivered the politician a big slap that caught him off guard.

Security personnel rushed at the culprit and dragged him off stage. The humiliating scenario was observed by the country’s Interior Minister, Ayatollah Khamenei’s office members, and other state officials.

Read Also  "There is no celebrity in Ghana, not even Sarkodie"- Xandy Kamel (video)