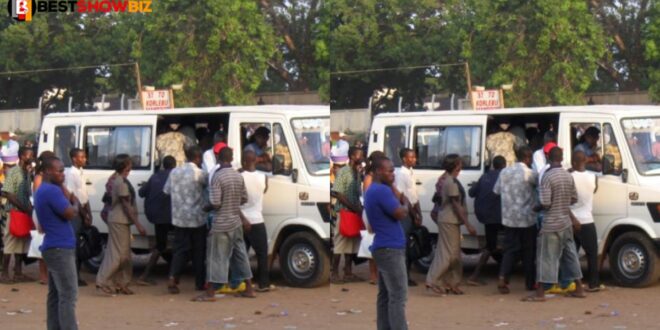 A furious guy crashed his car into the side of a ‘trotro’ driver’s vehicle, stopping him from continuing his journey, according to a video posted online.

The video starts with the guy standing in front of the ‘trotro’ driver’s vehicle, expressing his displeasure and requesting that the driver park his car on the side of the road.

The ‘trotro’ driver is heard in the video, which is quickly spreading on social media, suggesting that they both go to the police station to file their complaints.

While shouting obscenities, the guy reverses and collides with the ‘trotro’ driver’s car, imposing sanctions on it.

The passengers in the ‘trotro’ were forced to evacuate, with several voicing their dissatisfaction with the man’s behavior.

It is unclear what prompted the miscommunication between the man and the ‘trotro’ driver.