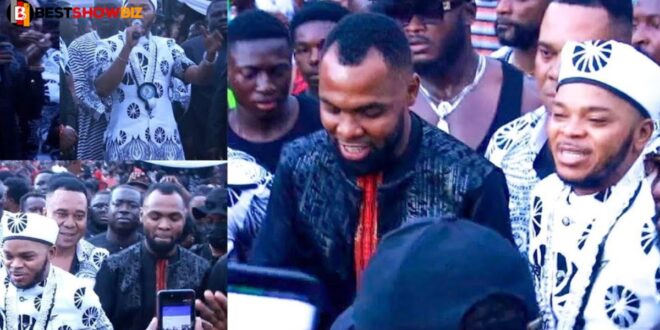 scores of notable Ghanaian pastors attended the burial of Bishop Daniel Obinim’s late father, whose final funeral rituals took place on Saturday, August 28, 2021, there was an atmosphere of unity.

Despite some Christian Ministry rivalry, the founder and leader of International God’s Way Church (IGWC) received a lot of love from his colleagues after their arrival.

They appeared to have set their disagreements aside and flocked to the location to assist Obinim in burying his father and paying their respects.

Reverend Francis Kwaku Antwi, the founder and leader of Anointed Palace Chapel, also known as Reverend Obofour, was among the pastors that attended the funeral.

At the funeral, Obofour made a larger appearance, wearing an umbrella over his head. Obofour exchanged pleasantries with some of his coworkers at the burial before taking his seat.

Rev. Obofour’s arrival stole the show, as seen below.