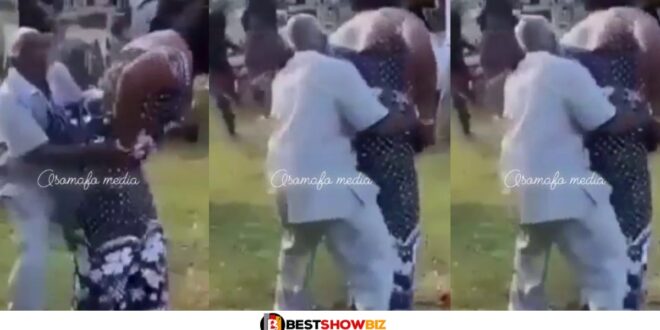 After seeing the footage of an older man, who was presumably between the ages of 50 and 60, forcefully grinding a woman at a party, many people found it difficult to remain silent.

The woman may be between the ages of 30 and 35 if you look at her facial expression.

At the celebration, they could be seen dancing to Kidi’s well-known song “Enjoyment” when the old man started with a crazy dance.

He began winding his waist after grabbing hold of the woman’s enormous behind. In order to meet the man, the woman was also spotted winding her waist.

The woman eventually granted this elderly man access to her behind to grind, but he was overly pushy in wrapping his waist.

The woman made the decision to leave the dance floor, but the elderly man was spotted tightly clutching her.

He was still observed twisting his waist, showing that he did not want her to leave. The woman and the crowd began laughing as a result.