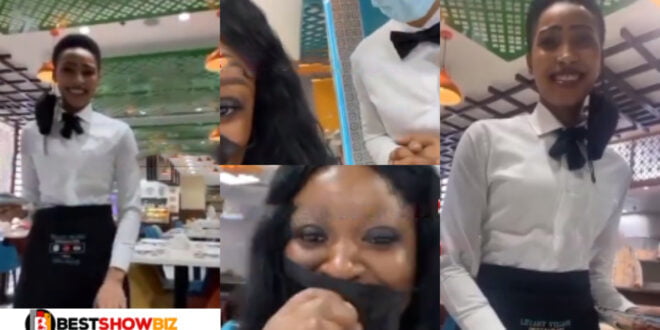 A group of roughly four waitresses can be seen in a video swooning over Jackie and asking her to remove her mask so they can prove it’s her.

After some back and forth about avoiding causing a commotion at the restaurant, Jackie Appiah decided to remove her mask

They struck up a conversation, during which the waiters disclosed that they are Jackie’s admirers from Rwanda — two of them, who appeared to be twins, couldn’t stop fawning about Jackie.

Read Also  Because of Papers; Young Black man marries old white Grand lady, says she is the love of his life

However, the star-struck waiters gained momentum and began to request pictures with Jackie Appiah. She sat quietly while they shot a series of photos of her.

Jackie is, as usual, was on one of her extravagant vacations!