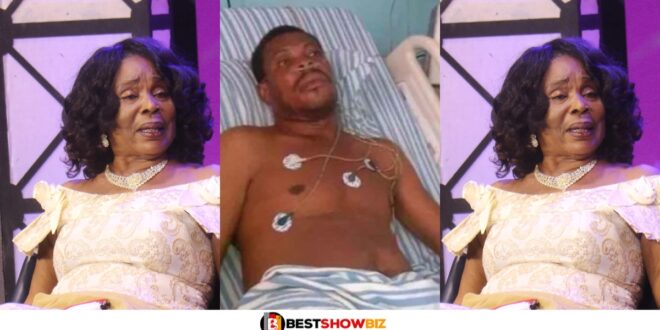 “Waakye didn’t even get a bed to sleep on to receive treatment at the hospital”- Maame Dokono cries as she narrates how Waakye died.

Waakye’s passing was attributed by Maame Dokono to a condition at the hospital known as “No Bed Syndrome.”

Grace Omaboe, also known as Maame Dokono, stated that the “No Bed Syndrome” at the hospital was to blame for Waakye’s passing.

The death of veteran actor Prince Yawson alias Waakye, which occurred on Tuesday afternoon at the 37 Military Hospital, has been linked by Maame Dokono to the insufficient number of beds available in Ghanaian hospitals.

When Maame Dokono was asked about the passing of Waakye, she claimed that when they found him, they hurried him to the Ridge Hospital, but the doctors there were unable to treat him since there was no bed available.

She reported that it was necessary to transfer him from Ridge Hospital to the 37th Military Hospital.

“At the 37 Military Hospital, they also had no hospital beds so he was attended to on a stretcher. Before they got back with equipment to attend to him, he gave up the ghost,” Maame Dokono cried