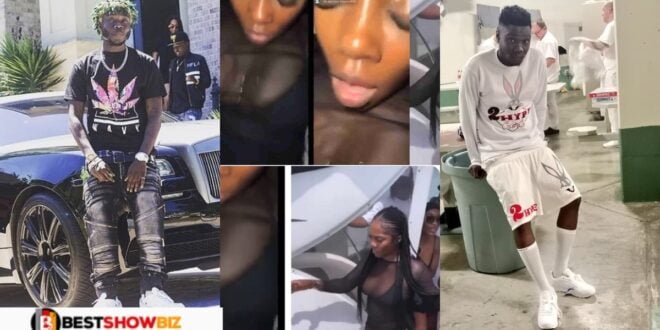 Showboy, a Ghanaian rapper based in the United States, recently revealed on his social media account that he was turned on after watching the s3xtape of Nigerian musician Tiwa Savage.

Showboy, who is still incarcerated in the United States for a crime he committed, stated that the leaked sekz tape of Nigerian singer Tiwa Savage makes him feel like he needs to be released soon.

Recall Tiwa revealed that she was blackmailed by someone who had her nudes and threatened to leak them if she didn’t meet his demands.

Well, it appears that the songstress did not comply, which resulted in the blackmailer leaking the video.

Showboy, who had the opportunity to watch the video, couldn’t keep it all in as he took to Twitter to post;

Tiwa savage sex tape got me feeling like am missing a lot etwe yi b3 y3 d3 … obaa forgetti wa ma me kote abrim … u make my dick hard for prison….. a dey come MASTABATe …,