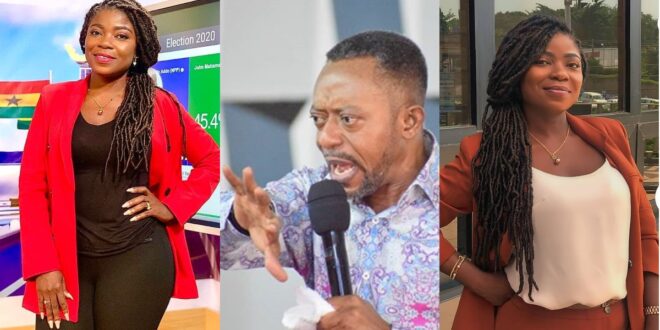 This attack on the TV presenter is coming after she allegedly tagged the leader and founder of Glorious Word and Power Ministry as a ‘fake’ man of God over his prophecies.

Vim Lady, whiles making reports on the 7th December polls, advised the so-called Prophets in Ghana to stop giving fake prophecies, especially about elections. She mentioned Owusu Bempah as one of the fake prophets in Ghana and undoubtedly, it has got the pastor pissed.

Read Also  "I almost died in an Accident because of My boyfriend," - Vicky zugah shares her experience

Addressing this while speaking with his congregation as captured in the video below, Owusu Bempah described Vim Lady as a woman with manly features and as if that wasn’t enough, he said she is a woman who possesses witchcraft.

He recounted how he once commended the broadcaster during an interview only for him to find her insulting him by tagging him as fake on a live TV before bragging about how the employer of Vim Lady, Kwame Despite accords him the maximum respect.

Watch the video below to know more;