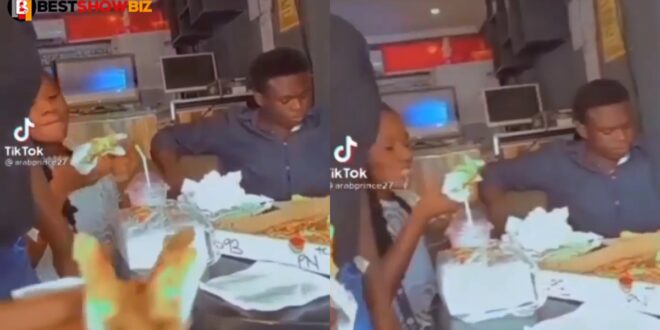 Video: Young man gets angry after lady showed up on a date with friends to spend all his money

A young Ghanaian man had one of the worst days of his life after a lady he asked on a date showed up with several of her friends.

In a fresh video obtained, the young man was seen with three females who were eating pizza from a box. The young man, on the other hand, appeared unhappy and perhaps angry about what was going on.

According to accounts, the young man invited a lady out on a date, and the lady chose to show up at the date’s location with some of her pals.

As a result, the young man had to pay the price for the ladies’ outing.

In what seemed to be a restaurant setting, the young man sat on one side of the table while the ladies and his date ate the pizza the young man had most presumably ordered.

At one point, one of the ladies persuaded him to accept a slice of pizza, which he grudgingly did while maintaining a serious face.