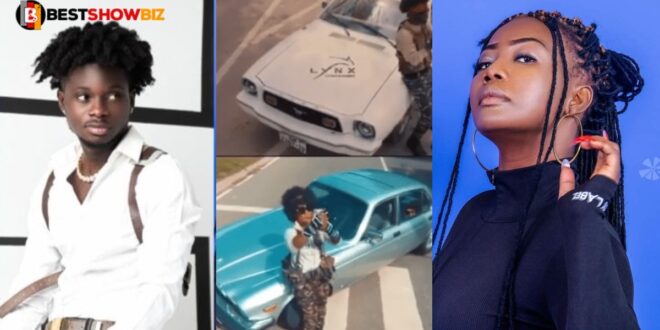 Video: ‘What I did to Kuami Eugene is a payback’ – Musician speaks after copying his video concept

Kuami Eugene, she claims, took her song’s melody, beat, and rendition and changed the feel, tempo, and name to Bunker.

Bhadext Cona made legitimate claims about Kuami Eugene stealing her song and making it his own shortly after the “Bunker” track was released.

Bhadext Cona discussed the concept of the “Bolga” and “Bunker” videos after their release in a new video.

Both videos appeared to have the same concept, plot, props, and almost identical melody.

Bhadext Cona responded to claims that she also stole Kuami Eugene’s video concept by saying that he did the same thing to Kuami Eugene as he does to others.

Kuami Eugene is disturbing me so I disturbed him a little. I’m learning from him. Kuami copied me and I learned from him. He copied my song Bolga and named it Bunker. We sent him my song through a third party for a feature. That was there months ago.”

She continued to say that: “Kuami Eugene knows what he has done. We didn’t copy him, we learned from him what he loves doing. He should also feel how bad it is when someone picks your intellectual property,” he said.

Generally speaking, Bahadext Cona has implied that Kuami Eugene should refrain from “stealing” other people’s work before accusing other people of stealing his.

Since the beginning of his career, Kuami Eugene has been accused of plagiarizing other people’s ideas and work.

Many musicians have claimed that he has a habit of stealing or copying other people’s work and claiming it as his.