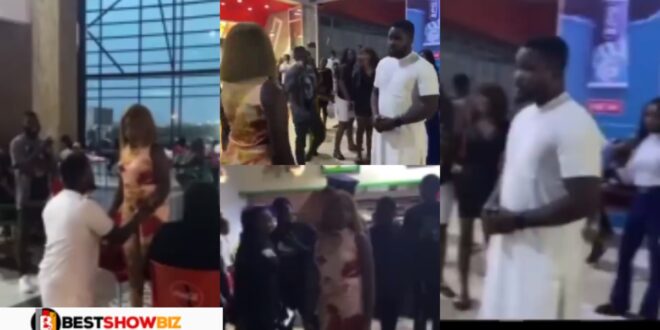 After rejecting her four-year-old boyfriend’s marriage proposal, a young lady has gotten a lot of attention on social media.

The lady could be seen walking out on the young man who was on his knee at a mall in a video shared on Instagram by @esutslayers_, who claimed it happened in Enugu.

At the mall, there were diners who could not take their gaze away from the spectacle in front of them, and one of them captured the moment on camera.

After walking out on her man while he was still on his knee, the lady attempted to exit the mall but was stopped by some bouncers before she could get to the door.

They kept insisting that she take her boyfriend’s ring while he was seen arguing with the mall bouncers, who refused to let her leave.

The lady in the video then returned to her boyfriend and informed him that she was ready to accept the ring.

The man, who was already standing, said he would put the ring on her finger while standing, but she objected.

The man took more than 30 seconds before agreeing to return to his knees and place the ring on her finger.

As the man went down on his knee to place the ring on the lady’s finger, the onlookers who had surrounded them cheered them on.

Following the lady’s acceptance of the ring, the couple was seen arguing and walking around the mall.