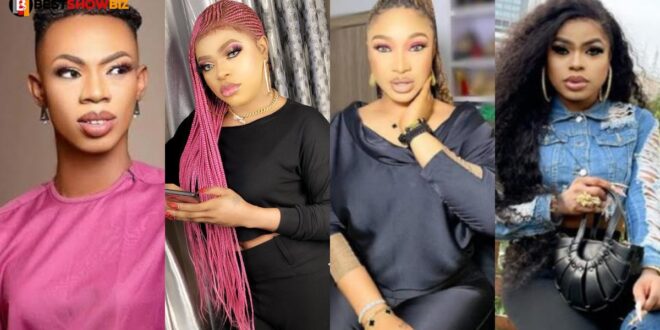 Tonto Dikeh, a popular Nigerian actress, has shown she has a thing for cross-dressers by jumping on James Brown after dumping Bobrisky.

Tonto is definitely on a quest to replace Bobrisky with another cross-dresser in her life.

James Brown recently shared a video of himself in bed, looking as miserable as a sick person.

He said he was not feeling well at the time. needles were seen in his arm as if he was in the doctor’s office.

In the video, as we sighted, Jame brown had a sad melody playing in the background while flaunting his frail appearance.

Though we have no idea of what is wrong with him, Brown, who learned the knack of attracting attention from Bobrisky, maybe sick or just pretending

Tonto dashed into his comment section and launched herself at him.

“Get well soon honey. Send me your no. If that’s ok with you. Imma huge fan,”