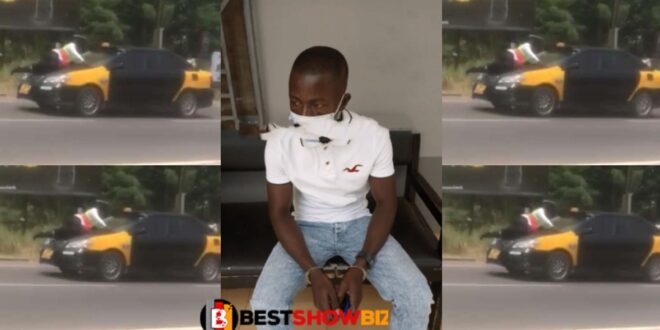 Video: Taxi driver who drove off with policeman on his bonnet finally jailed for 2-years

In February 2020, a video of a police officer lying on the hood of a cab and being driven away went viral on social media. The taxi driver who perpetrated the crime has already been sentenced to prison.

The taxi driver’s name is Daniel Ofori, and he was sentenced to two years in jail by the Koforidua circuit court B.

He was found guilty in court when he was charged with driving away for 300 meters with a police officer on his bonnet.

Both sentences will run at the same time. His driver’s license was also revoked for five years by the court, which was presided over by Her Ladyship Mercy Addie Kotei.

“Inspector Geshon Dafeamekpor told the court that the taxi driver, who was being monitored by the police MTTD for other road traffic infractions, was stopped at the Galloway traffic and told to park, but he refused and drove away with Sergeant Asante Peprah, who jumped on the bonnet to avoid being run over by the taxi driver.

“Daniel Ofori, on the other hand, was forced to come to a halt after another driver blocked his path, resulting in his arrest,” Citinewsrom.com said.

“This is a warning to other drivers, particularly the obstinate ones, whose attitude and demeanor on the road offends not only other road users and law enforcement officers but also pedestrians.”