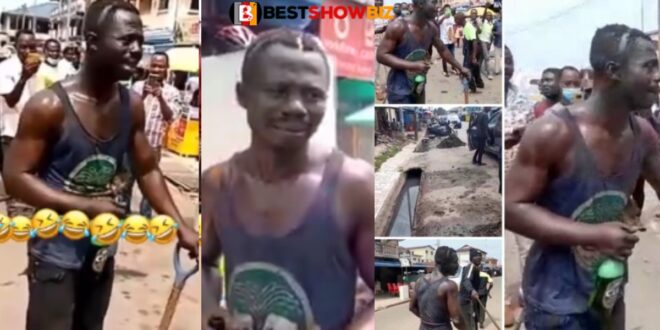 After stealing mechanic equipment and power lines, residents of Takoradi captured a suspected thief and invited him to amuse the town with his dance abilities.

According to the trending video sighted by Bestshowbiz.com, the accused thief was tied with a large robe in public and asked to dance to Kofi Kinaata’s song “Mbelede” while he was given beer to drink in other to earn his freedom.

According to the story, after being apprehended, the suspected thief was offered the option of cutting his two hands or cleaning the area’s clogged gutters.

Fearing for his life, the guy obeyed and followed the mob’s orders.

After receiving some heavy beatings from the crowd, he was hesitant to dance.

he was seen enjoying the bottle of beer and dancing just for his life to be spared.