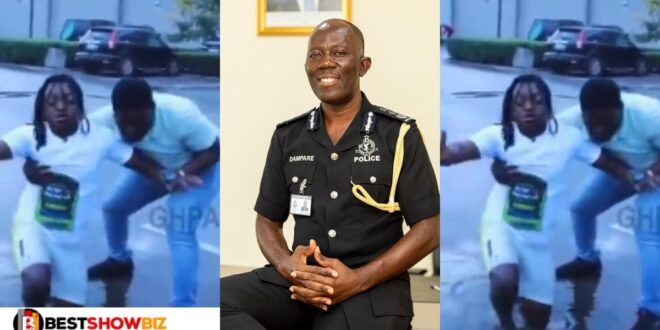 Video: Sumsum Ahuofe goes down on his knee in water and begs IGP to release Shatta Wale and Medikal

Sumsum Ahuofe, an actor, is seen in a video pleading with the Inspector General of Police (IGP) to release  Shatta Wale and Medikal, who had both been remanded.

To make his point, the Kumawood actor, whose characteristic bulging eyes have become a part of his image, stormed a major mall in Kumasi.

Sumsum removed his sandals and kneeled in a pool of water in the mall’s forecourt, nearly prostrating himself until a man rushed to his aid and helped him get back on his feet in the video as we sighted.

He pleaded with George Akuffo Dampare to release the two men, who are accused of inciting fear and panic and flashing a pistol on social media, respectively.