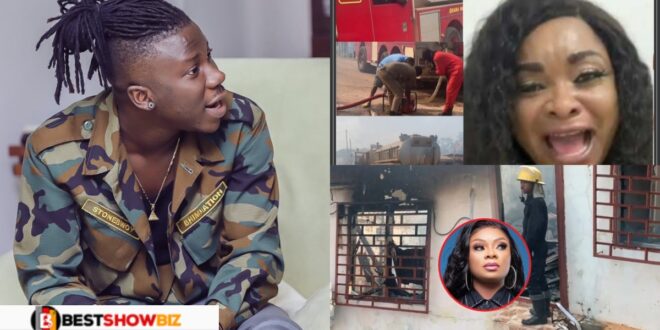 Video: Stonebwoy was the first to call and send me money when my house got burnt – Beverly Afaglo

Beverly Afaglo, a Ghanaian actress and entrepreneur, has revealed that Raggae Dancehall artiste Stonebwoy was the first person to call and send her money after her house caught fire.

Beverly Afaglo’s house burned down a few weeks ago after her mother mistakenly left a burning bush on.

This sparked outrage on social media, with a few celebrity friends of hers rushing to her aid.

Yvonne Nelson, among others, set up a Gofundme account to assist her in recouping the cost of some of the items that were destroyed.

Despite their efforts, they were only able to raise some sum of money for her, which she later revealed was insufficient to rent a two-bedroom house.

After all, in a recent interview with Abeiku Santana on UTV, Beverly revealed that Stonebwoy was the first person to call her and send her money to help her deal with the costs of everything that got burnt.

watch part of her interview below;