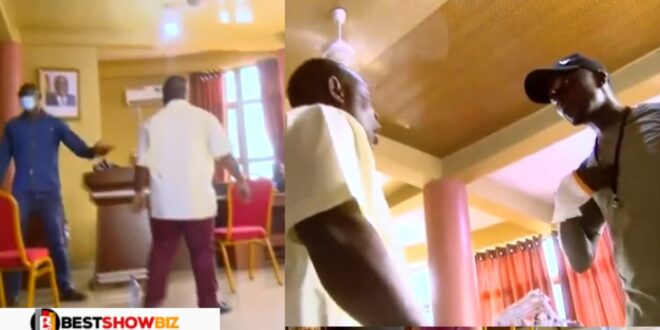 Video: Rejected Juaben MCE fights Assembly Members as he demands the return of his money

Alex Sarfo Kantanka, the Juaben MCE nominee who was rejected for the second time by the assembly members, was seen in a video requesting reimbursement of a bribe he gave to several assembly members.

Mr Sarfo Kantanka was shown in a viral video hurling insults and slurs at the assembly members present.

He screamed at them, demanding that they return the money he had given them in exchange for their votes.

Despite the efforts of the NPP regional and constituency executives, as well as some powerful traditional elders, the nominee was unable to gain the support of assembly members.

The nominee received 10 Yes votes to 15 No votes with one ballot rejected out of 26 total votes cast in the presence of Ashanti Regional Minister, Simon Osei Mensah.

The unhappy nominee, unable to control his rage, requested that his money be returned to him by the assembly members.