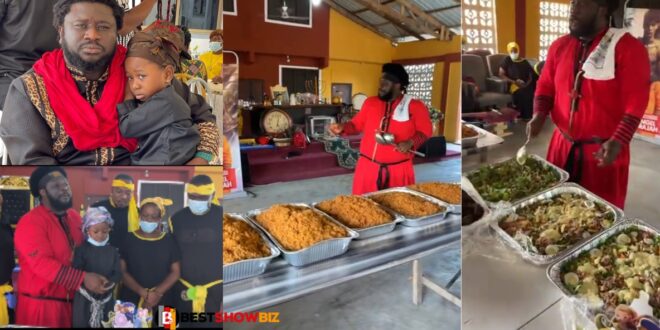 Prophet Asiamah, also known as Chop Bar Pastor or Block Nation, continues to receive rave reviews for his church antics. Despite the numerous accusations levied against his teachings, he has gained the hearts of many.

He is regarded as a devout spiritual guy who has carved out a position for himself as one of Ghana’s most unusual pastors.

He’s known for saying things like God has a wife, Satan and Lucifer are brothers and a slew of other bizarre claims.

One of his distinguishing characteristics is that he feeds his followers on Sundays. According to him, it is critical that the shepherd feeds the sheep both before and after they hear the word.

The man of God celebrated the birthday of one of her daughters today, September 19, 2021. It’s still unclear whether she’s a spiritual daughter, a church daughter, or an actual daughter.

his is the first time the prophet has celebrated a daughter’s birthday with much pomp and circumstance. Many have criticized Ajagurajah for emphasizing the sharing of food over the sharing of the message.

Many worries that if he continues on his current path, the majority of his congregation will merely come to church to eat and then depart.

View the Photographs and video below;