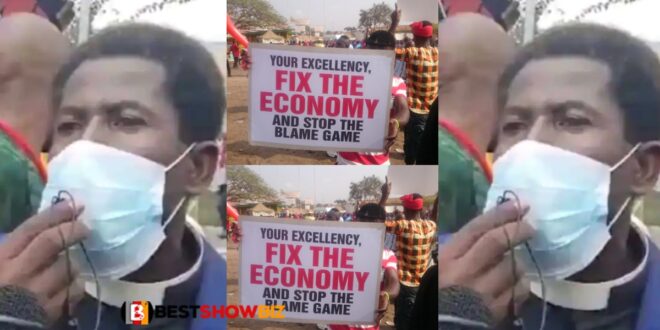 Apostle Daniel Agyei, a man of God, has sparked outrage on social media following a comment he made during the # FixTheCountry demonstration.

On August 4, 2021, Apostle Agyei joined hundreds of Ghanaians on the streets of Accra in protest of what they call terrible leadership (governance) in Ghana under Nana Addo’s government.

The attention of the Evangelical Methodist Church in Asylum Down was drawn when he was dressed in pastor’s attire (suit and clerical).

Apostle Agyei said he joined the demonstration because his church members were broke and could not afford to pay for offertories and tithes in church when he was given the opportunity to speak.

“Nowadays, our church members when they come to church they can’t give an offering, they can’t pay their tithe because all our members are all broke. There are no jobs in this nation. That is why I have joined this demonstration.”

The pastor further stated that the demonstration was not political in nature since the protestors were not concerned with the NDC or the NPP, but just desired the best kind of government for the Ghanaian people.

“This is a peaceful demonstration. We are not going to destroy any state property. We are not against NDC or NPP but we are against the bad leadership, the bad governance of this country,” he emphasized.

Read Also  'I don't like the free vaccines, I am willing to pay $1 million to get it'- Kennedy Agyapong