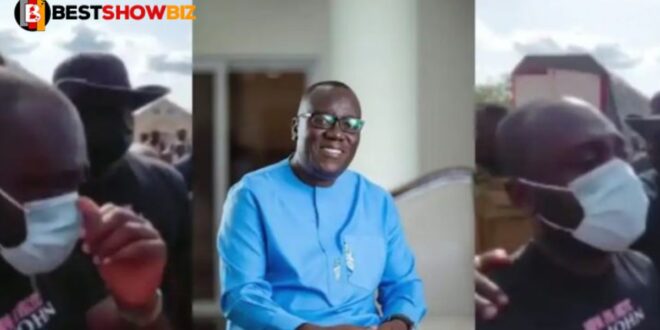 More sorrowful events from the last burial service of the late New Patriotic Party executive, Kwadwo Owusu Afriyie, widely known as Sir John, have gone viral on social media, according to a video discovered by our organization.

The moment in the video that has since devastated hearts worldwide was when the late government official’s son was filmed crying as he prepared to bid goodbye to his father. As he saw his father’s remains being transported from the hearse, Sir John’s son was videoed wearing a tagged shirt with his father’s portrait on it.

The entire scenario brought tears to the son’s eyes, and guess what? A security officer appeared out of nowhere to soothe him. The young man stood there with his arms folded, watching as a group of people removed his father’s casket from the hearse.