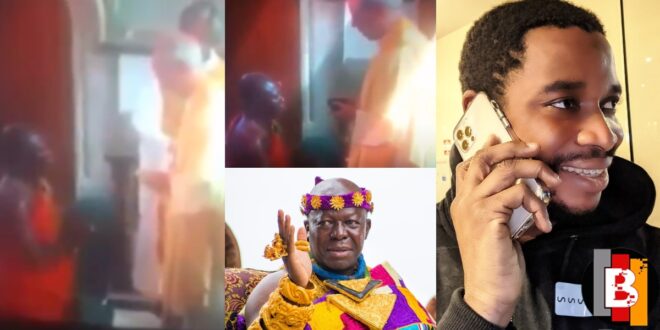 Nana Otumfuo Osei Tutu Ababio, the Asantehene, has been in the news every day for the last few weeks.

The Asantehene has been in the news recently due to a video of him in an Anglican church in England.

In the video, he kneels in front of a white priest who pours oil on his head and robs the surface of his head with his palm.

He seemed to have gone through this rite while receiving communion.

People have had various reactions to the video, with some seeing it as an insult to tradition and others seeing nothing wrong with it from a Christian perspective.

The following are some of the Twitter responses to the video:

@ssimply_natty
He’s an anglican and he’s performing his obligations as an anglican.
Just like how the president pays respect to Otumfuor when he goes to AR.
what’s wrong is the comments in the video

@_Roofman2131gh
Totally agree,the new wave of kings have their own religion before becoming kings and there’s nothing that’s stop them from being that faith and still being king,if those two were to be conflicted am sure he would’ve dropped one before becoming king

@am_magma
He’s serving the god of Isreal and you think they can use antoa to curse somebody?

Antoa seff no go mind am!!

@CheEsquire
This can’t be! Is this Opemsuo? Is this the King of the Asante Kingdom? Wow!

Read Also  Twene Jonas was not the one cursed by the Bechem Chiefs and Elders, here is proof.
Share