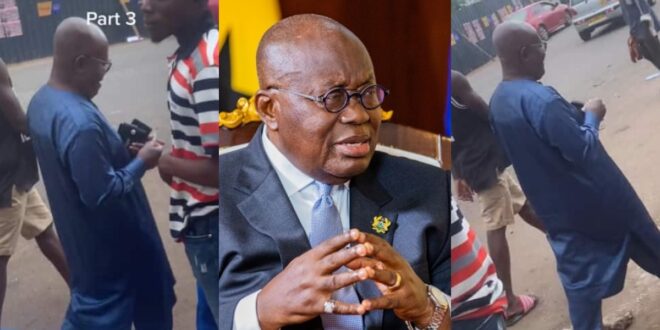 A video was taken of a Ghanaian man who was walking about the streets of Kumasi. This individual bears a striking resemblance to Nana Addo, who is the current President of the Republic of Ghana.

The man, who appeared to be buying some coconuts, was seen on film by a pedestrian, who then began to harass him in a funny manner.

The bystander kept yelling “Akufo Addo” while he filmed the person who looked like Nana Addo. He, on the other hand, paid no attention to the passerby’s comments and continued walking away.

On social media, users reacted in a variety of fascinating ways to the video, with some finding it humorous while others expressing concern for the man’s well-being.

Read Also  "Dampare may be awarded soon; my team and I are keeping an eye on him." -Dr. UN

considering how unpopular the president had become as a result of the economic crisis that the country was going through, they felt. It is possible that angry citizens will attempt to attack him because they believe he is Nana Addo.

Read Also  ‘you're aware that your br3asts are sagging, why are you wearing this?' – Beverly Osu attacked by a troll after sharing this photo