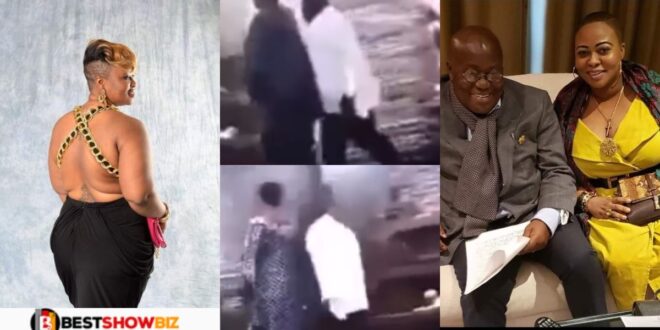 A video has surfaced of the two of them heading to an unidentified location from a hotel.

The video has gone viral at the same time that reports of an alleged affair between Serwaa Broni and President Addo Showboy nicknamed ‘Nana No’ has gone viral.

The President has been trending incessantly for the last several days due to a series of charges made by a woman named Serwaa Broni.

Serwaa stated that since she possessed certain presidential secrets, NPP attack dog Hopeson Adorye was dispatched to rob her and seize the papers.

Broni further said that the President was smitten with her and had attempted several times to get her into bed with him.

She quickly rose to the top of Ghana’s trending topics, where she has remained for many days.

Every day, more details regarding her ties to the NPP emerge, including a photo of her at a meal with Kennedy Agyapong.

Her images with President Akufo-Addo are many and clearly demonstrate their friendship.

The next step is to find footage of them together, which we’ve done.

In the footage, the two of them are seen together in a hotel.

Read Also  "if you don’t call me and talk to me .. pls I will k!ll myself"- Funny Face cries after his new girl also left him

With this video, they’ve built another bond.