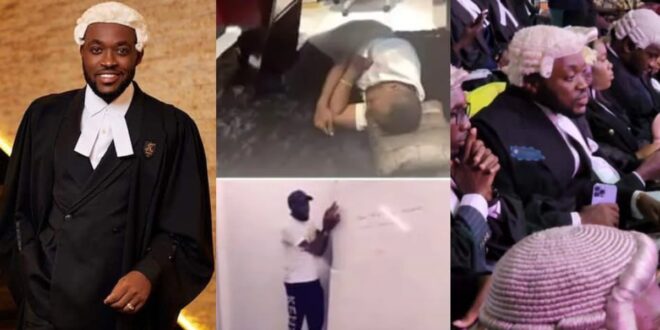 Video Of Despite’s Son, Kennedy Osei Sleeping In Class Pops Up After Being Called To Ghana Bar

Kennedy Osei, the General Manager of Despite Media and the son of well-known businessman Dr. Osei Kwame Despite, has recently been enrolled in the Ghana Bar.

He is one of 785 new attorneys who will be admitted to the Ghana Bar Association (GBA) on Friday, November 9, 2022.

Kennedy shared several photographs from his graduation with the message “The Time Is Here: Kennedy Asante Osei ESQ.” in an Instagram post that he published to commemorate his accomplishment.

While many complimented him on his accomplishments on social media, others attempted to blame his success on the fact that he was the son of a wealthy man.

However, it appears that the claim that Kennedy Osei had it easy on his journey to becoming a lawyer was incorrect, as is evident in a video available to us.

The video shows Kennedy Osei’s time at the Ghana School of Law and how hard he had to work to pass his exams.

Kennedy is seen taking a nap under a table after learning at night. Another part of the video shows him helping out his colleagues as he stands in front of the class to teach.