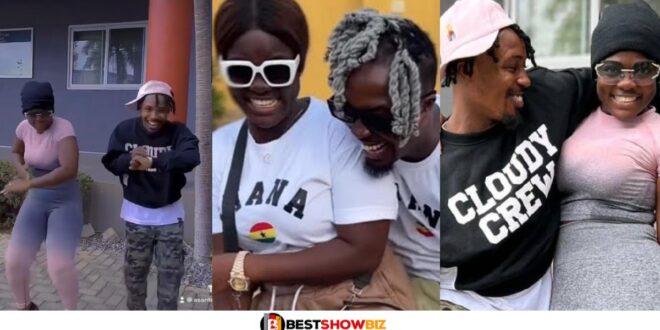 Asantewaa and dancer Dancegod Lloyd have been buzzing on the internet for the past three days following rumors that they were in a serious romantic relationship behind the scenes that resulted in a pregnancy.

According to screenshots circulating online, Asantewaa reportedly told a friend that her husband is weak in bed, which is why she opted to date energetic Danecgod Lloyd to satisfy her sexual urges.

It was also mentioned in a conversation between Asantewaa and her friend that she became pregnant for Dancegod Lloyd and then aborted the pregnancy to avoid disgrace and shame.

All of these secrets were allegedly released by Eyram, Cyril of YOLO fame’s wife, who has been feuding with Asantewaa for the past two months over a GHS 30,000 debt.

Asantewaa has come out to strongly deny these ridiculous accusations, which could put her marriage in danger if she is not careful.

Following all of this uproar, a new video has appeared on the internet that shows Asantewaa and Dancegod Lloyd acting like lovers.

Dancegod Llyod smooched on Asantewaa and cuddled her like his lover in the video, raising eyebrows and leading many to suspect they were lovers some time ago.

Meanwhile, Dancegod Llyod has yet to respond to the charges that she impregnated a married lady, which is considered an abomination.