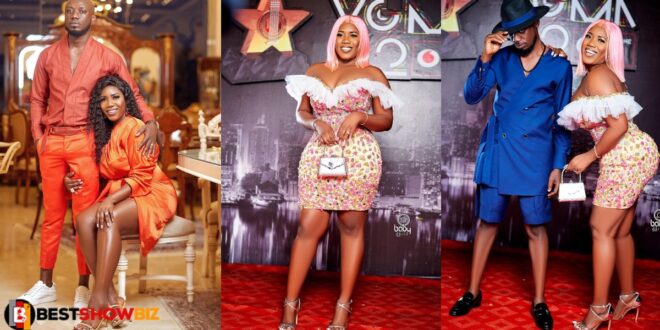 Video: Nkonkonsa and wife, Victoria Lebene steps out for the first time after cheating saga

The couple was dressed to the nines, especially the Mrs., who wore a lovely off-the-shoulder gown and wore her pink hair in heels.Eugene did not sit well with us.

He appears to prefer his legs over any other part of his body, since he has been observed wearing clothing that emphasizes his legs.

This is the couple’s first public appearance since Eugene’s recent s*xual controversy. They are doing everything they can to keep up appearances, but we doubt anyone believes them.

Vicky and her spouse were all smiles as she posed for the camera on his shoulder. Victoria has already threatened to curse anybody who criticizes her husband, implying that we were the ones who encouraged him to cheat on her with Abena Korkor.

Nkonkonsa became famous after Abena Korkor published a list of all the men she had slept with, which included his name.Instead of shutting up like the rest of them, he chose damage control, which did not go well.

He ended up adding insult to injury by writing in Abena’s diary that he was always thirsty and that he didn’t love his wife, Victoria.