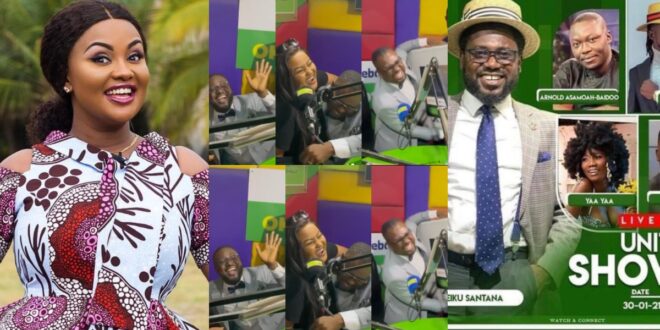 Video: Nana Ama Mcbrown gifts Abeiku Santana a brand new 50 inch TV for taking over her show when she wasn’t around

Nana Ama McBrown decided to gift Abeiku Santana a brand new 50-inch Smart Television after she was hosted by him on Okay FM’s drivetime show for how he selflessly decided to take over her seat as host of UTV’s ‘United Showbiz’ when she was not around.

Mcbrown was out of the country for two months because she had to travel to Germany for surgery to correct a problem with her right hand.

During that entire period, her colleague Abeiku Santana stepped in to assist and host, and he did an excellent job as well as she could have.

Nana Ama Mcbrown decided to give Abeiku Santana the 50-inch television as a token of her gratitude now that she is back in the country and fully recovered — a move that got Abeiku Santana excited, and his reaction was priceless.