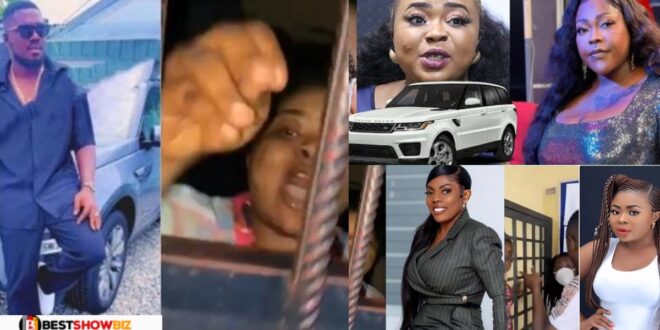 We reported earlier about how Sarfowaa claimed on her Instagram page that Nana Doe is her boyfriend and that GHOne TV presenter Nana Aba Anamoah wants to snatch him from her.

Recall that we also reported about the arrest of Sarfowaa of which a video of her in cells was attached.

well, in a new development, Mona Gucci has finally given a vivid account of what actually transpired between Sarfowaa and Nana Doe.

It appears that Sarfowaa tried to blackmail Nana Doe a hopping sum of GHC 100,000 after she allegedly made advances on the guy according to Mona in a video sighted by Bestshowbiz.com.

Mona Gucci claimed the guy reported Sarfowaa to the Police for blackmailing him, threatening, and defamation.

As seen in the previous story, Sarfowaa was arrested and according to Mona, she begged Nana Doe for the release of Sarfowaa which the guy claimed he want to proceed with the case to court.

watch the video below, to know more about the issue: