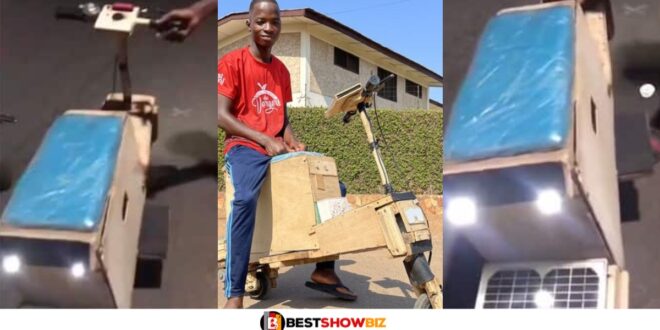 This solar-powered electric motorbike was built by Samuel Aboagye, a youngster who is so passionate about engineering and innovations that it costs him his money for food.

The 17-year-old JHS graduate says he can’t resist the opportunity to create when concepts arise.

On the Anopa Bofo Morning Show on Angel FM on January 5, 2022, he revealed he began creating as a youngster.

“I have to invent. I used to make vehicles out of empty milk tins. No plans or sketches, I just work on it when an idea comes to me”, he added in Twi.

He told Kofi Adoma Nwanwani that he goes hungry to bring his ideas to reality because he is passionate about his profession.

When asked how he funds his initiatives, he revealed this.

A kind man offered him GHS100 when he spotted him riding his scooter.

A solar-powered electric motorcycle was born after Samuel Aboagye saw the problems of the electronic scooter from overseas.

So the bike charges while traveling and don’t leave you stuck as the foreign scooter did in traffic, he added.

He told the BBC that his innovation was created to help physically challenged people and that all they have to do is sit on it and start moving without trouble or effort.

With enough money and resources, Samuel Aboagye aims to alter scooters and develop motorbikes that can transport more passengers.

Instead of a wooden automobile, the youngster made Bluetooth gadgets from paint barrels and jugs.

Using wood and a vacuum cleaner, he built a fan that blasts air from both sides.

Samuel’s instructor, David Sam-Hagan, regarded him as a quiet pupil who hardly speaks out.

« Samuel is not your average A-class kid and may not be clever but he likes Science, especially electricals, so I included him in a group when an electron project came up », stated Mr. Hagan.

He highlighted that Samuel’s work so far is only the tip of the iceberg.

“What you have seen is only 10% of his potential since I know him and his conversations with me. It was an electric hand-washer”, said the teacher.

Dr. Thomas Mensah, the creator, and chairman of Ghana’s Silicon Valley has stated that the institution will adopt Samuel Aboagye and prepare him to be the next Dr. Apostle Kojo Safo Kantanka.