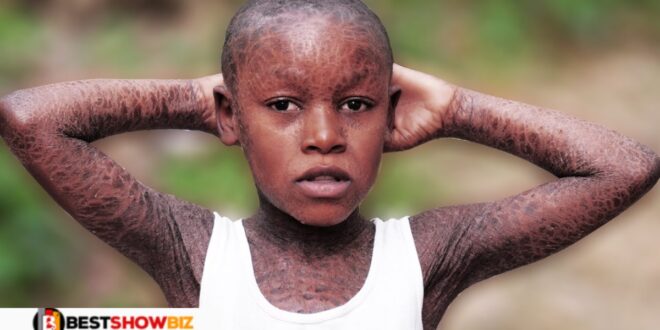 Video: Meet the 11-year-old boy whose skin looks like a snake

Kami Mugisha, an 11-year-old boy whose skin resembles that of a snake, is said to make his friends laugh at him.

He claims that his ability to attend school is being hindered by his peers referring to him as a crocodile.

Kami is said to have Epidermodysplasia verruciformis (EV), also known as tree man syndrome, which is a very rare skin condition.

According to reports, the young boy has a difficult time falling asleep at night and even becomes uncomfortable when the sun is shining and the rays of the sun fall on his skin.

Scovia, Mugisha’s mother, told reporters that many schools have refused to admit her son because they believe his illness is contagious and could affect other students.

It is associated with high susceptibility to skin-borne human papillomaviruses (HPVs).

Uncontrolled HPV infections lead to the formation of scaly macules and papules that resemble tree bark.