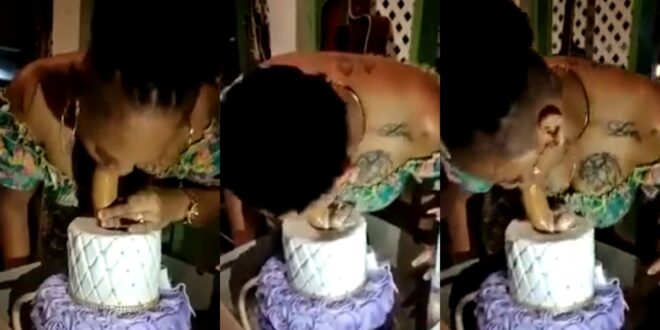 (video) Married woman given a pḝn!s shaped cake for her birthday, see what she did with it.

A married woman has sparked a commotion on the internet when she was seen devouring a birthday cake that looked like a woman giving BJ to a guy in the bedroom.

The married woman could be seen as she violently licked the cake and demonstrated her sexual prowess in front of her birthday party attendees, who applauded her every move.

The video has since attracted many criticisms from social media users who were shocked at the action of the woman.

Marlon G: She what somebody’s daughter Is doing. Then on Sunday someone will go and give testimony that yesterday was my birthday… Disgusting and embarrassing!

Eke D: What nonsense is this for Christ’s sake? Why cant people respect and fear God again? Must you do everything you see? Habaaa!!!

Opurum J: For you all to have understood and defined what this woman was doing….that shows you are extremely corrupt in mind, body, and spirit. What if she comes out and says; as it was her birthday, she recalled and had to perform how she used to rush her mother’s breast so passionately during infant…. who would defend that? Moreover, it was una fellow righteous human being that made the cake and has been delivering to similar events too.

Read Also  Two Kumawood actresses who you have excelled in TV presenting.
Share