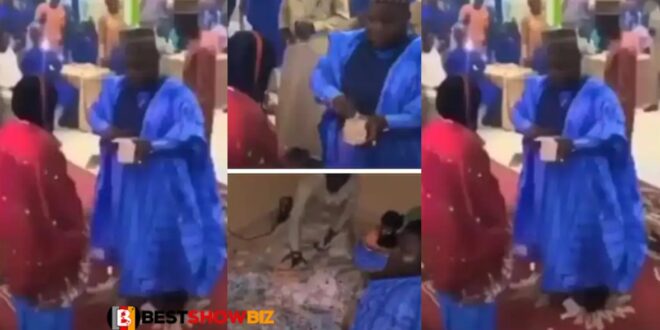 Video: Man sh0ckingly picks back all the money he sprayed on bride who refused to smile and dance

Netizens have reacted to a strange incident that occurred at a wedding ceremony in a video that has quickly gone viral.

In the video, as we sighted, the bride stood like a tree and did not smile while an agbada-wearing man poured money on her.

Interestingly, the visitor did not appear to mind her expression as he continued to shower money on the bride.

The guest who had showered the bride with money was shown in a room with two others packing back the money they had sprayed during the wedding after some hours.

The reason why the man gathered his money back might be because the bride was not smiling or showing any interest in the money he rained on her.