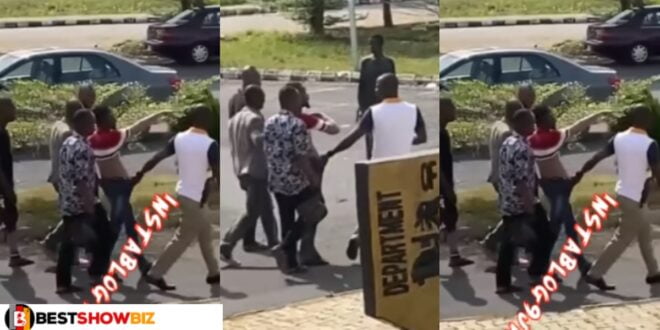 Abdulwaheed Waliu, a level 400 student from the Department of Microbiology, Faculty of Life Sciences, University of Ilorin, UNILORIN, Kwara State, has been arrested for allegedly assaulting a female lecturer.

The young man, who is also said to have failed an exam, went to his lecturer, Mrs. Zakaria, for help, which she denied, resulting in the young man pounding her desk.

As per reports, the student approached the lecturer in the office and began slapping her, after which she dragged her out of the office and continued to beat her in front of the department.

People passing who witnessed the incident rushed to the scene, but the student fled but was apprehended by school security.

He was handed over to the police officers, while the lecturer went unconscious for a brief moment before being brought back to life.

watch the video below; swipe…