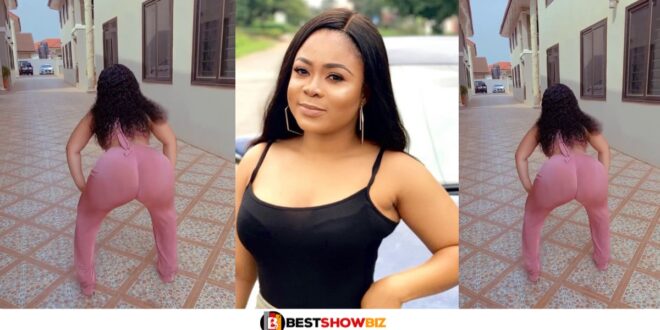 VIDEO: Kisa Gbekle Shakes Her Newly Acquired A$$ As She Finally Confirms She Has Given Birth

Ghanaian actress Kisa Gbekle, a TV personality, has chosen to show her followers that she just acquired b0rtos is not as difficult as many people believe.

On Thursday morning, the former host of the “Business of Entertainment” show posted a video of herself tw3rking like a pro on her Instagram page.

Kisa Gbekle, who published the video, encouraged her followers to be themselves and not to fake a lifestyle in order to impress others.

She also stated that her birthday is on Sunday, so this was her way of preparing for the big day.

She also appears to have utilized a portion of the caption to discreetly corroborate recent reports that she has given birth, as she stated that her new b0rtos are as soft as her baby’s cheeks.

Kisa Gbekle captioned the video, which has received a lot of attention thus far.

‘It’s OK to be who you are.16th January Is The Queens Birthday. #queenk#ayigbetoffee. Soft like my baby’s cheek ’