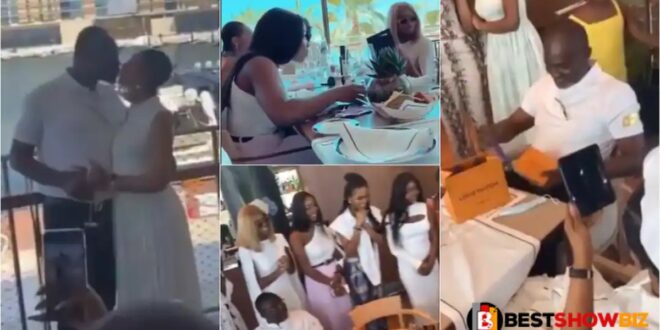 Kennedy Agyapong, the Member of Parliament for Assin Central, has taken a trip to Dubai with his second wife, Christina, and several of his children.

The MP’s vacation with his family is part of his birthday celebrations, which took place on Wednesday, June 16, 2021. Ken Agyapong has reached the age of 61.

Ken Agyapong and his large family are seen seated at a table for supper at the luxurious Bulgari Yacht Club in Jumeirah Bay in a video obtained by Bestshowbiz.com during the trip.

The MP may be seen unwrapping various boxes, which are thought to be gifts from his children.

Some of his daughters were spotted surrounding their father as he smiled as he unwrapped the parcels.

The Rolls Royce vehicles that carried the family are also seen parked on the side of the road in the footage.

After all was said and done, Ken Agyapong cuddled up to his wife and kissed her in front of the crowd.