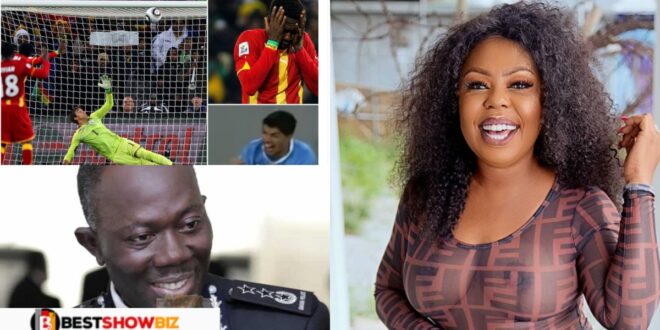 In a new video, Afia Schwarzenegger says that given the harshness with which the new Inspector General of Police (IGP), George Akuffo Dampare, is carrying out his duties, Asamoah Gyan could be in his spotlight.

Gyan’s devastating penalty miss, according to Afia, caused a lot of fatalities and caused others to pass out, thus he would be taken to court on the same tangent as Shatta Wale and Medikal.

Remember how, at the 2010 World Cup, Asamoah Gyan missed a key penalty kick, denying Ghana the chance to become the first African side to reach the semi-finals, breaking hearts throughout the continent?

After the score stayed 1-1 in regulation time, Ghana was eliminated from the game via penalty kicks, shortly after Dominic Adiyiah’s goal-bound header was ruthlessly blocked by Luis Suarez, who was then with Athletico Madrid, with his hands.

The defeat, as well as the surrounding drama, has become iconic and indelible in the minds of not only Ghanaians but nearly everyone in Africa and even beyond.

As a result of the heartbreak he caused, Ghanaians have not forgiven their main marksman, and thus marked the start of a tense relationship between Ghanaian supporters and Asamoah Gyan.

He went from being a hero to being a tyrant, and the situation has stayed unchanged to this day. Gyan has stated that his loss continues to haunt him.