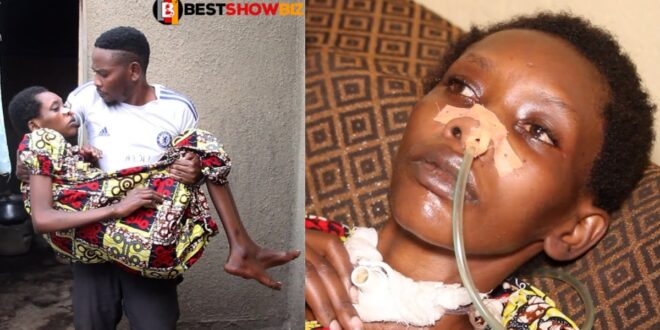 Video: I will never give up on my dying wife – Man says as he shares sad story

Some people believe that going through terrible moments in life makes us stronger, yet the bad experiences that other people go through are usually beyond their strength. If a husband is both a mother and a husband at the same time, he is probably going through a lot in life. This is the story of Barhati, a young man who feeds his wife via her nose after she has given birth and has been in a coma for several days.

According to Barhati, he and his wife became good friends before becoming romantically involved when he proposed to her. Everything appeared to be going well for them. They had a baby boy and then chose to have another child. This was the point at which everything began. His wife became pregnant, and they were expecting their second child. Barhati’s wife was 7 months pregnant at the time.

Barhati heard his wife cry extremely loud one night at 2:00 a.m. She complained of stomach aches, but she was only 7 months pregnant at the time, thus it was too soon for her to give birth. He drove her to the hospital, where she was given a few painkillers. The doctors informed her that it was not the right moment for her to give birth and that she would be OK if she went home. She was feeling well on the drive home, but as soon as they arrived, everything changed.

She started yelling again as soon as they arrived home, but this time it was much louder. She was taken back to the hospital by Barhati. Her kid was removed during the operation. If they gave it time, Barhati told her wife, everything would be OK. An incubator was used to place the infant. He returned home to care for his young son. The physicians phoned him in the middle of the night to tell him that his wife was dying and that no one was by her side. Barhati abruptly halted what he was doing and hurried to the hospital.

His wife was practically dead when he arrived at the hospital. For several months, the wife was in a coma. He received the kid from the incubator two months later. The kid was still alive, but his mother, who was supposed to breastfeed him, was in a coma. Barhati fed the infant milk that his mother had purchased for him. Barhati was preoccupied with his new infant and his dying wife. As a result, he was fired from his job, and things became extremely difficult for him. He gave the kid to his mother-in-law, who promised to look after him.

Barhati was told to take his wife home after seven months in a coma because he could not afford to pay her hospital bills. He returned home with his wife and cared for her by feeding her through her nose. She awoke a year later after being in a coma, but she could not speak and could not understand anything. Barhati is going through a lot since he is simultaneously a doctor, a mother, and a spouse. Despite the challenges that Barhati is facing, he claims that he would not abandon his dying wife.