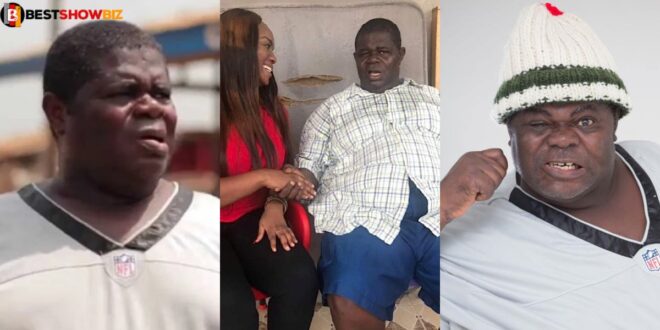 Video: “I was paid GHC10 in my role in Taxi Driver instead of GHC30” – TT reveals

Psalm Adjeteyfio aka TT, a veteran Ghanaian actor, has revealed how someone stole his hard-earned money while he was starring in the famous 1990s series Taxi Driver.

Psalm Adjeteyfio stated in a video from his rented house that he was contacted by one John Kay, the owner of the Taxi Driver series.

According to TT, John Kay told him that he (Adjeteyfio) was the series’ icon and that he would take the series to a national platform.

Mr. Adjeteyfio stated that he consented to work for John Kay, but he did not inquire as to how much he would be paid, nor was he informed.

He went on to say that he got paid GHC10 for each episode of the show, which has been running for several years.

The actor stated that he just lately realized that he was meant to be receiving GHC30 instead, but was being stiffed.

Thus, according to the 72-year-old actor, Mr. John Kay had ordered that he (Adjeteyfio) be paid GHC30 for each episode, but someone was taking GHC20 of that money.